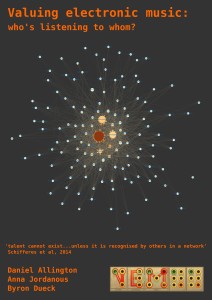 Small version of the poster I put together for today’s pop-up research event at the Open University. Node size indicates total number of followers for SoundCloud users based in each city; arrows indicate where those followers come from (so far as we can tell); node colour indicates centrality to the network of these relationships (by eigenvector centrality). If you want more technical details, read last September’s post.

London’s right at the centre, bridging a North American group (New York, Los Angeles, Chicago) and a West European group (Berlin, Paris, Amsterdam) to which a group of Australian cities (Melbourne in particular) appears to be connected. Massive music industry centres elsewhere in the world (such as Seoul) take peripheral positions.

Nashville’s a bit of an oddity. Lots of followers, but we don’t know where they are because they didn’t fill out their profiles. Is that because fans of country music feel less invested in this particular website than fans of hip hop and electronic dance music?